A History of Struggle

In the mid-1980s, apartheid South Africa saw heightened repression, the revival of the workers’ movement and an intense struggle for liberation. Trade unions and civic and service organizations needed a base from which the struggle could be waged. The Western Province Council of Churches (WPCC) and an NGO, the Social Change Assistance Trust (SCAT) purchased the Community House site, a dilapidated auto-workshop in Salt River.

The area marks the origins of industrial unions in the province and is known for its textile and light metal factories and the site has history of service and support to the surrounding community. After two years of renovations, Community House was official opened on 21st August 1987. Agents of the apartheid state bombed it eight days later. Despite this, a base of support and collective mobilization for a diverse range of organizations were established.

In the construction of South African national heritage, the histories of organized workers and working class communities have been largely ignored. In 2007 the Community House tenants and activists embarked on a plan to establish Community House as a multi-purpose labour and community heritage site. Key elements of the plan were to seek provincial heritage status, to resource public areas as a museum precinct and to conserve the building. 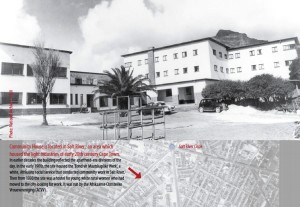 The process was driven by the collaborative work of the longstanding anchor tenants, COSATU, the Labour Research
Services [LRS], and the International Labour Research Group [ILRIG]. As part of the site development process the founding representatives stepped down from the Board of Community House. They were replaced by the anchor tenants – COSATU, LRS, ILRIG and a tenant representive from Workers World Media Productions.

The heritage project celebrates the role of working class communities in the making of history; enhances the working environment of tenants and their constituencies; revitalizes the site to meet the needs of local communities and communities of interest; and strengthen its long history of self-reliance through office rentals and the hiring of its three halls.

Community House adopts the concept of museum as a multi-purpose site of civic engagement, a space of knowledge and debate, informed by memory and history but forward-looking. 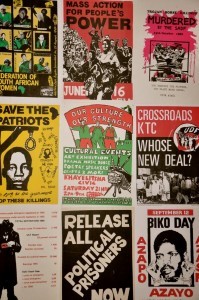 During the 1980s and early 1990s many organisations engaged in the struggles against apartheid capitalism were located at Community House: